Popular Artificial Sweeteners Are Not SHAPE-Approved 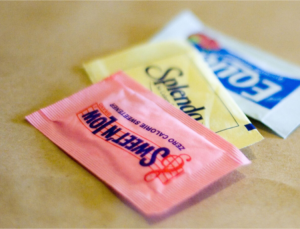 When you begin your SHAPE Program journey, you may be disappointed to learn that you can no longer drink your favorite diet soda, made with one of several popular artificial sweeteners. You may think, “But it only has one calorie! Why can’t I drink it?”

Our answer is that it might be the most poisonous calorie you can ingest.

What are artificial sweeteners?

Artificial sweeteners are a laboratory mixture of chemicals that taste sweet like sugar but have few to no calories. In a world that is used to counting calories as a way to control weight, popular artificial sweeteners make it possible to consume treats like soda and candy while adhering to a low-calorie diet.

But there’s a problem with that. Our bodies are like machines that operate today just as they did thousands of years ago. They don’t understand these man-made chemicals and cannot fully process them. As a result, these chemicals end up accumulating in your vital organs, polluting your bloodstream and/or creating cell mutations (cancer). Ingesting these popular artificial sweeteners is like pouring shampoo in your car’s gas tank; it wasn’t designed to process it, so the engine stalls and stops working.

It’s easy to feel like you’re making a smart choice with products labeled as low-calorie, but such claims are often red flags that the product is full of unhealthy ingredients, including popular artificial sweeteners like Sweet ‘N Low, Nutrasweet, Equal and Splenda.

What are some symptoms associated with the consumption of artificial sweeteners?

Consumption of artificial sweeteners increased 54% for adults and 200% for children between 1999 and 2012, according to a 2017 study by George Washington University’s Milken Institute School of Public Health. That increase is in direct correlation to the rise in obesity and chronic disease in the United States.

Another study determined that it’s possible to gain more weight by drinking diet soda containing popular artificial sweeteners than by drinking regular sugar-sweetened soda. (Of course, drinking regular soda comes with its own problems.) That’s because while artificial sweeteners don’t always increase blood sugar, they can induce an insulin response. Insulin response causes blood sugar storage in body tissue which leads to hypoglycemia and increased food intake. Essentially, artificial sweeteners can make you hungrier, so even though you’re only drinking one calorie, you are likely to eat more calories than you normally would, which can lead to weight gain.

Besides weight gain, there is a host of other symptoms we believe to be associated with the use of popular artificial sweeteners:

What is even more startling and of greater concern is that younger and younger people are developing autoimmune disorders, type 2 diabetes, heart disease and cancer. We believe that toxic chemicals in food are a major cause the health crisis in the United States.

If they’re so harmful, why do artificial sweeteners exist?

In 1976, William Dufty published a book called Sugar Blues. It explored the history of sugar, its use in the food industry and its relationship to declining health. While he wasn’t entirely wrong, Dufty’s exposé on sugar contributed to a societal panic that led to widespread adoption of artificial sweeteners.

Additionally, artificial sweeteners make consumers believe they’re being healthy and may have some addictive properties. They’re also inexpensive to produce. This combination of factors means food manufacturers that use artificial sweeteners are making an enormous profit. In the food industry, profit often takes priority over consumer health and safety.

Saccharin (the pink packet; brand names Sweet’N Low and Sugar Twin) is a white, crystalline coal tar compound that is 300-500 times sweeter than sucrose (table sugar). It was discovered in 1879, while scientists were researching toluene derivatives (toluene is produced during the process of making gasoline and other fuels).

Commercialized not long after its discovery, saccharin was banned in the manufacture of processed foods in 1912 due to possible health risks, but it was still available to consumers as a stand-alone product. The sugar shortages of World War I and World War II created a demand for artificial sweeteners, and by 1945 saccharin made its claim to artificial fame.

By the 1960s, it was the sweetener of choice by the diet soft drink industry (remember TaB?). In the 1970s, saccharin was quietly removed from the GRAS (Generally Regarded as Safe) list by the FDA because of its proven cancer-causing effects in animal studies, and a law was passed that required warning labels for foods containing saccharin. That bill was later overturned and in 2000, the warning labels were removed. 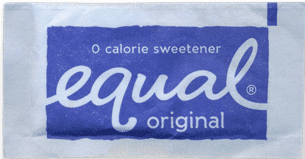 Discovered in 1965 and approved by the FDA in 1981, aspartame (the blue packet; brand names Equal, Nutrasweet and Aminosweet) is approximately 200 times sweeter than sucrose and is the most controversial artificial sweetener to date. It is scientifically known as 1-aspartyl 1-phenylalanine methyl ester and according to Joseph Mercola, M.D., aspartame is completely metabolized by the body. When words like “wood alcohol,” “paint remover” and “formaldehyde” turn up in a discussion regarding the breakdown of aspartame, you don’t have to be a scientist to know that this product should never be ingested.

In Dr. Mercola’s book, Sweet Deception, aspartame is responsible for 80 percent of the complaints made to the FDA regarding food additives. Since its introduction, it has been evaluated and re-evaluated. Study upon study has been conducted to prove or disprove its safety. Why? Because, while no one has been able to fully prove it’s unsafe or cancer-causing, no one has been able to prove its safety, either.

The initial studies that led to aspartame’s FDA approval were funded by aspartame’s manufacturer (this should be illegal, but unfortunately it happens all the time). Subsequent studies were only looking at whether aspartame causes cancer in laboratory rats. The issue here is that there are a lot of things that can go wrong before cancer develops, like migraines, memory loss and mood problems. And you can’t exactly ask a rat if their depression has gotten worse since introducing aspartame into their diet.

Fortunately, diet soda sales (especially Diet Coke) have been dropping over the last several years–as consumers have become more educated on the devastatingly harmful effects of aspartame, the most popular artificial sweetener for diet soda. Let’s keep this trend going! 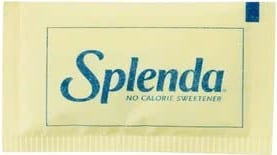 Amidst ongoing controversy over saccharin and aspartame, sucralose (the yellow packet; brand name Splenda) came to the “rescue.” Sucralose was discovered in 1976, and the FDA approved it in 1998. It is 600 times sweeter than sucrose and is found in thousands of food products.

Like other popular artificial sweeteners, sucralose was also discovered by accident. Chemists were trying to create a new insecticide, and after experimenting with hundreds of chlorinated sugars, three chlorine ions were exchanged for three hydroxyl groups on a sugar molecule to create 1,6-dichloro-1,6-dideoxy-beta-D-fructofuranosyl-4-chloro-4-deoxy-alpha-D-galactopyranoside. It was named sucralose, similar to sucrose, so that it would sound “natural.”

“McNeil Nutritionals [Splenda’s manufacturer] has gone to great lengths to suggest that Splenda is natural and safe by using the slogan, ‘Made from sugar, so it tastes like sugar.’ But after the sugar has been treated with trityl chloride, acetic anhydride, hydrogen chlorine, thionyl chloride, and methanol, in the presence of dimethylformamide, 4-methylmorpholine, toluene, methyl isobutyl ketone, acetic acid, benzyltriethylammonium chloride, and sodium methoxide, it is anything but a sugar molecule. Nowhere in nature is there any form of sugar that remotely resembles the resulting chlorinated hydrocarbon known as sucralose. This product is not natural, nor is it a real sugar. It isn’t even close.”

Because sucralose is relatively new, the full negative impact on health may not be clear yet. However, several studies have pointed to a possible connection between sucralose and migraines.

While saccharin, aspartame and sucralose are the most popular artificial sweeteners today, there are a few others in use that you should know about:

Even WebMD and the Mayo Clinic (both respected and often-referenced organizations) suggest that they’re okay when used “in moderation.” The FDA defines “moderation” in this case as “no more than 23 packets a day of Splenda, Sweet One or Newtame; 45 packets a day of Sweet’N Low; or 75 packets a day of Equal.” These numbers are astronomically higher than what most would consider moderate. You can see several references throughout this article from equally respected and well-known sites that disagree with this claim.

In the end, it’s better to be safe than sorry. If you’re dealing with health problems, try avoiding popular artificial sweeteners altogether to see if some of your symptoms improve. But rather than switching to regular soda, why not just cut out soda altogether? There is a chance of harm by eating manmade food, but there’s absolutely NO harm in eating real, whole food.

We have reviewed some healthy alternatives to sugar and popular artificial sweeteners here and we will always recommend clean, pure, life-giving water as the healthiest beverage.